Leicester Square has always been a centre of activity and these days most of the people who visit are tourists. It acts as a hub for nearby districts, including Trafalgar Square to the south, Covent Garden to the east, Chinatown to the north and Piccadilly to the west.

Leicester Square was first laid out as a square in 1670, where it was named after the recently built Leicester House, which in turn was named after the second Earl of Leicester. It gradually transformed into a gentrified residential area and attracted artists and writers such as William Hogarth, Joshua Reynolds, and Karl Marx. 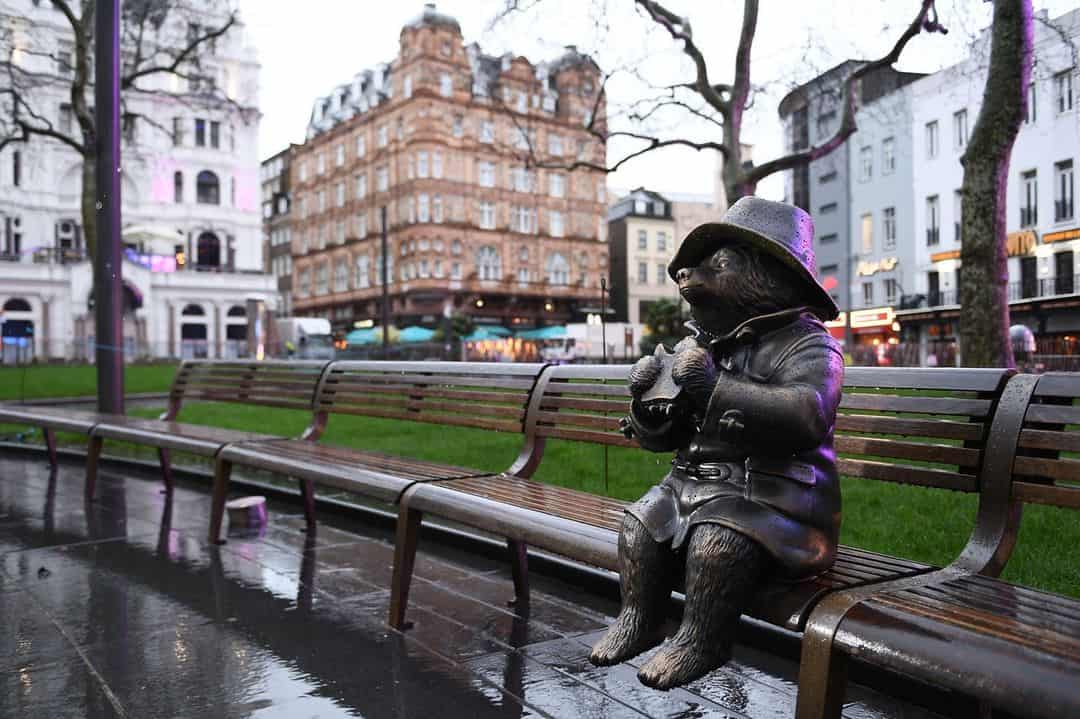 In more recent years Leicester Square became a centre for entertainment which revolved around the construction of several large theatres. As the taste of the London population changed, so the theatres were given a new lease of life as cinemas. Thus, giving Leicester Square a whole new sense of identity in the capital.

Things to do in Leicester Square

The Odeon was finished in 1937 and to this day retains its art deco styling although the interior has been continually upgraded with the advancement of cinema technology. (It was the first cinema in the UK to have Dolby Cinema.

With all the latest technology, it’s quite an experience seeing a film at the Odeon but being central London seats don’t come cheap. If you’re happy with something a little less grand two minutes north from Leicester Square towards Chinatown and find The Prince Charles Cinema on Leicester Place.

Here you’ll find listings of modern classics and cult movies at art-house prices. Even better the seats are raked so you’ll always be able to easily see past the person in front.

In keeping with the celebration of film in cinemas around Leicester Square, there is also a series of bronze statues, called Scenes in the Square, which celebrate some of the most famous characters of film today and yesteryear. Statues include Mary Poppins and Laurel & Hardy, Batman, Wonder Woman, Mr Bean, Bugs Bunny and even Gene Kelly.

The statues were originally commissioned as a temporary works of art but their continued popularity has resulted in further time in the limelight and even the addition of new characters.

As Leicester Square is now pedestrianised Leicester Square Gardens is a peaceful spot to escape from the frenetic pace of tourism footfall. There are deck chairs and benches although this is of course a popular spot.

At the centre of the gardens, you’ll find a statue of Shakespeare surrounded by dolphins, while at the corners of the gardens you will find busts of historical figures such as Isaac Newton.

If you search on the pathways, you will find engravings, which display the distance from Leicester Square to various countries of the former British Empire. At certain times of the year a small fair, with a Ferris wheel, is installed in Leicester Square Gardens. Keep an eye on the pigeons while you’re resting; they want your sandwich!

There was a resurgence of the Chinese community in London post-war. Everyone was feeling the pinch and the low rents around modern-day Chinatown attracted newcomers, who decided to build restaurants to feed locals. British soldiers returned from their Far East duties searching for the Chinese food they had quickly learned to love.

By the 60s Chinatown had become the centre of the Chinese community with new additions from the British territory of Hong Kong. The variety of food and services now available is very wide, including bakeries, bars, restaurants, reflexology, souvenir shops, barbers, and even travel agents.

Chinese New Year is always an exciting time to visit.

Just a short stroll from the southwestern corner of Leicester Square will bring you to the opulent facade of Her Majesty’s Theatre. They have been four different theatre buildings hosting productions on this site since 1705. The first theatre was called The Queen’s and Handel conducted his opera, Rinaldo there, introducing top-class Italian opera for the first time in England.

Today’s theatre was opened in 1897 with stunning architecture on the outside, which is influenced by the French Renaissance, and lavish decor on the interior. Andrew Lloyd Webber’s opera, Phantom of the Opera, was performed for the first time in 1986 and sold-out performances have continued ever since making this production the most popular in the history of the theatre.

Games of chance, dice, and cards have been popular for hundreds of years but really became established during the reign of King Henry VIII. More recently in the capital gambling centred around private clubs throughout Kensington and Chelsea, where more wealthy residents had the money to spend.

Most larger London casinos are now based in Leicester Square, such as the Hippodrome Casino which opened in 1900 as a circus theatre and was more recently converted to a casino and entertainment centre in 2012. It has state-of-the-art gaming tables, restaurants, and a nightclub to while away the night time.

Also in Leicester Square, are the Grosvenor Casino and The Empire Casino, which stands out from the crowd with its flamboyant frontage. It was first opened in 1884 and has a grand interior ranging over two floors.

Stroll for two minutes from the south-west corner of Leicester Square and you will come to Panton Street, home of the Japan Centre. It opened in 1976 to cater to the Japanese community initially just as a bookshop.

Its popularity grew when groceries were added to the products, with similar shops opening in Hammersmith and Stratford. Today you can buy freshly made Japanese sushi and souzai, as well as a whole range of ingredients and store cupboard essentials. In addition, you can search through authentic Japanese cookware and browse the extensive range of sake, beer, and whiskey.

Most visitors to London enjoy treating themselves to one of the many shows in the West End. However, the popularity of these shows is such that ticket prices can easily become exorbitant.

This is where in 1980 the company, The Half-Price Ticket Booth, stepped up to the game and sold their first cut-price tickets from a small, wooden hut. It was painted in green and yellow stripes, on the West side of Leicester Square.

The company rebranded their name to the snappier TKTS, and they now sell theatre ticket deals online, as well as from the booth in Leicester Square.

Current offers are displayed on screens across the top of the booth and be prepared to queue or buy online. Everybody likes a bargain!

Piccadilly Circus has been used as a backdrop for so many films that visitors from far and wide are keen to see the reality. It was originally built in 1819 to connect Regent Street and Piccadilly. It was called a circus from the Latin for ‘circle’ rather than any entertainment connotation.

Piccadilly Circus has long been known for its large screens attached to buildings, which display animated neon advertising for all the latest products, which attract the crowds at night. The fountains below Eros are a continual draw for young courting couples.

Also, there is a statue of Eros, the winged archer, which was constructed at the end of the 19th century. If you want to be accurate, the character is in fact, Antheros, the Angel of Christian Charity but he’s much better known by Londoners as Eros.

The statue was erected to celebrate the philanthropic work of Lord Shaftesbury. He was a lifelong campaigner for the education of poor children.

With the environmental movement gathering pace, the writing might have been on the wall for a company producing plastic bricks for children to play with. However, Lego have seized the challenge and all of their play bricks will be made from fully sustainable plastic by 2030.

In a world of ever more digital entertainment it’s encouraging to see that kids (and adults!) are still captivated with more traditional toys. The Lego displays at the Leicester Square store range over two floors, along with a vast array of Lego products.

You can buy kits for any number of projects including a world map or a Fender Stratocaster.

It’s sometimes easier to see the displays from the outside through the windows. The store is always popular and you’re likely to find a queue from the door. If you like what you see, take time to visit the much larger Legoland theme park in Windsor.

Don Ward opened The Comedy Store in 1979. He’d recently returned from a trip to New York and Los Angeles, where he seen the theme of the comedy was observational, often poking fun at politicians and establishment. He saw the potential for the UK and wanted to recreate some similar themes in the comedy store.

After advertising for acts and comperes he chose Alexi Sayle as the angry host and a selection of newcomers who went on to front the new wave of ‘alternative comedy’.

The Comedy Store has gone from strength to strength and many comedians who started their careers there have gone on to have successful careers in TV and film.

The Swiss Centre in Leicester Square promoted everything Swiss you could think of including, a Swiss bank, a tourist office, a chocolate and souvenir shop among others.

The Swiss Centre was eventually closed in 2008 and the glockenspiel removed. However, due to popular appeal a revamped Swiss glockenspiel was located on the same site.

The clock movement is set on a 10 m pole in the pedestrianised area of Swiss Court. It incorporates 27 bells, two clocks and 11 moving figures. The bells chime and a five-minute performance takes place five times a day, Monday to Friday, and eight times a day at the weekend.

With the number and variety of restaurants in and around Leicester Square you’re bound to find something that appeals.

M&M’s World in Leicester Square is the world’s largest sweet shop. It ranges over four floors and is decorated in the bright colours of the sweets. At more than 35,000 ft.² you will be able to find M&M merchandise, gifts, favours, bulk sweets, and of course M&M’s.

You can design your own M&M’s, change the colours, and even upload graphics and photos to be printed onto your M&M’s.

Amazingly the company has been selling products for over 100 years and the first product was introduced by Forrest E. Mars, Sr., when he returned to the United States. He established M&M’ Limited in Newark, New Jersey and M&M’S Plain Chocolate Candies were introduced in 1941.

Pubs and Bars in Leicester Square

A two-minute walk south from Leicester Square will bring you to the steps of the National Gallery. It houses the U.K.’s collection of Western European paintings, ranging from the 13th to the early 20th centuries. There are more than 2300 paintings in the collection, most of which are on display to the public.

Some of the most famous artists include Raphael, Leonardo da Vinci, Turner, Rembrandt, Degas, Cézanne, Van Gogh, Renoir, Monet, Rubens, Velázquez, Van Dyck, and Titian. The gallery is open for 361 days a year and is free to visitors.

The National Portrait Gallery is home to portraits of some of the most historically important and famous British people and is the most extensive collection of portraits in the world, with over 215,000 works.

The National Portrait Gallery is currently closed until spring 2023 for extensive building works but you can still follow and view many of the works of art online.

Read Next: Best Things to Do in Shoreditch London

It would be easy to be dismissive about Leicester Square. By its nature it attracts constant stream of transient tourists who want to tick off the main sights. However, scratch beneath the surface you will find centuries of history that have contributed to the formation of the square as it is today.