Someone from the late 1970s visiting Camden today would be utterly lost, as the transformation has been so complete. In those days it was a down-at-heel squatters’ paradise, albeit with some great pubs and of course the Roundhouse.

Skip forward to today and the cosmopolitan variety of the bars and restaurants goes some way to reflect the aspirations of the new inhabitants.

In just a small area, some of the best kitchens that we have pulled together include cuisines from southern America, Italy, Mexico, Greece, Japan, China, Venezuela, Portugal, and India. 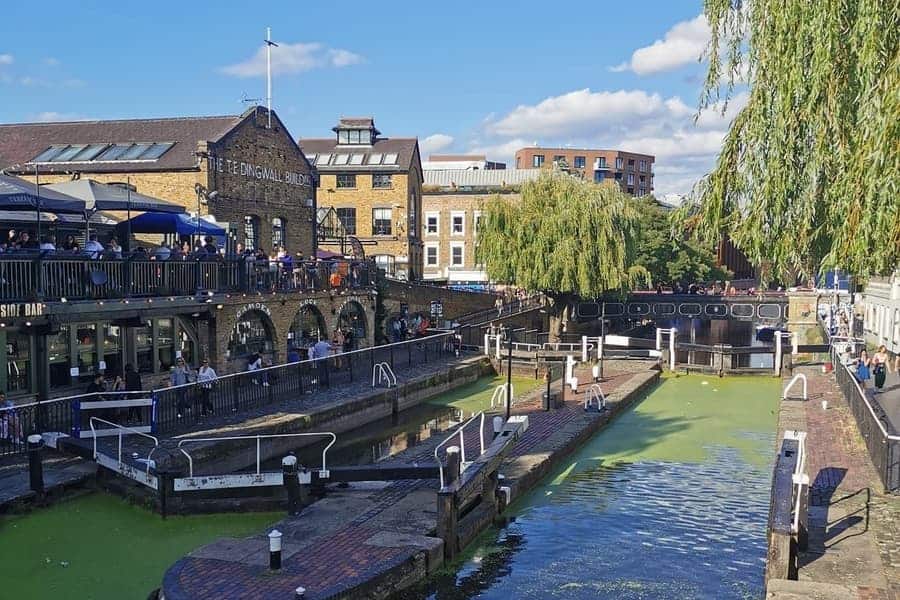 Starting out in Soho in the late 1980s Mildred’s has now spawned other restaurants around the capital. From the outset, the owners’ aims have remained the same, to create good value, fresh and colourful, international vegetarian food.

The restaurant has an upmarket cafeteria style with back-to-back banquette seating and individual tables. The lighting is discreet but there is plenty of daylight coming in through the floor-to-ceiling windows.

There is a weekday breakfast and brunch menu, with several dishes making use of scrambled tofu.

There are breads and side dishes to accompany. For drinks, there are bottled beers and ciders and a selection of wines from organic and low-intervention vineyards around Europe. All drinks are vegan.

The Blues Kitchen has been one of the top blues venues for rhythm and blues since 2010. Still going strong, there is music every night in the form of bands, singers, and DJs. Inside the restaurant is vibrant with a Southern feel, helped along by more than 50 brands of bourbons and whiskeys behind the bar.

The menu lists starters such as wings and ribs, while main courses include burgers and sandwiches, grilled from the barbecue and Southern-fried buttermilk chicken served with cajun spice rub, coleslaw, and fries or salad. There is also a selection of sides for bigger appetites.

To drink there are several draft, and bottled beers, while the wine list is predominantly European with several bottles available by the glass. The Blues Kitchen also takes bookings for drinks parties and has a separate room for private parties.

Haché Burgers opened its first restaurant in Camden in 2004. It struggled at first but then firmly found its footing with a ‘Best burger in London’ award.

Diners still enjoy the combination of juicy and tasty burgers and great service. The restaurant interior is modern and bright with plenty of mirrors on the walls to give a sense of space.

There are snacks and sharing plates to start on the menu, while the burgers are divided into steak, chicken and plant-based. The Steak Truffle, comes with truffle aioli, caramelised onions, Gruyère cheese, and truffle shavings. Burgers are served with ciabatta, brioche, or a baby leaf salad. There is also a selection of grills and salads.

Desserts are moreish such as, Basque ‘Burnt’ Cheesecake, with rhubarb compote.

Centrally located in Camden, Il Sugo sports the Italian colours across the sunshade for the small outside eating area. Inside the decor is simple but welcoming, with tables and chairs and banquette seating, along with exposed brickwork and framed prints.

The menu starts off with a selection of sharing tapas plates before moving on to traditional pizza flavours, which are reasonably priced for central London. The pasta section lists Italian favourites such as Linguine Al Salmone, linguine with fresh salmon and baby spinach in a rich tomato cream sauce.

There are three risottos including Risotto Tartufo, a creamy risotto in a homemade mushroom and truffle pesto sauce.

Meat dishes include recipes for steak, veal, and chicken, while a selection of salads finish off the main courses. For dessert, there are favourites such as panna cotta and Affrogato, a scoop of vanilla topped with a shot of hot espresso.

Centrally located, Frida Camden serves the best of Mexican and Spanish dishes in a relaxed, rustic, cantina-style setting. Chillis and hams are hanging over the bar, while colourful chairs and tiles and extra colour.

There is an extensive breakfast and lunch menu, with burritos, quesadillas, and enchiladas, as well as a selection of burgers.

For evening service, there are starters of sharing tapas plates and nachos, and main courses such as Grilled Sea Bass Fillet, marinated in garlic, pepper, oil and lemon and served on a salsa bed with asparagus and rice. For desserts, there are pancakes and churros.

The restaurant isn’t licensed but offers a selection of smoothies and soft drinks.

Fani, the cook at Yamas Greek Cuisine, was born and raised in rural northern Greece.

She learnt her skills and recipes from her mother and grandmother, carrying on the tradition of authentic Greek cuisine, in the style of the Mediterranean diet. The restaurant interior is simple with low-hanging lamps over the tables.

The menu starts with an extensive range of signature Greek grills, including gyro’s, burgers, and skewers. The same dishes can be converted into more filling wraps, using different layers of pita bread. A short selection of traditional main courses, such as mousaka and gemista follow.

To drink at Yamas Greek Cuisine there are authentic Greek bottled lemonades and beers, as well as a range of Greek wines.

Read Next: Best Things To Do In Camden, London

Pizza Pilgrims has an attractive green facade in the busy thoroughfare of Parkway.

Inside simple wooden tables and chairs are covered with gingham, while an open servery, is lined with stools. There are now 14 Pizza Pilgrims restaurants around London, as well as Brighton and Oxford.

The menu starts with sharing platters, followed by DIY pizzas, where you have the option to add different meat, vegetable, and cheese toppings. Including a gluten-free base.

Alternatively, you can order directly from the traditional pizza menu. For dessert, dishes include a Nutella tiramisu and a mini ice cream Sandwich.

The interior of Sushi Salsa is very modern with a high ceiling, across which LED spotlights and ventilation ducts span. As you would expect the kitchen is open plan, so you can follow the intricate work of the chefs as they chop and prepare the dishes.

The menu starts with sashimi and carpaccio shashimi before moving on to mixed platters. These are composed of the chef’s selection of nigiri, sashimi and sushi cut-rolls, which are aimed as sharing platters.

There are then maki and temaki rolls and a selection of cooked main courses, such as Wasabi Prawn, with king prawns in mild Japanese wasabi sauce.

To drink there are Japanese bottled beers, while plum wine, and sake is available by the bottle.

Right in the heart of Camden, Lan Kwai Fong, is the place to go for a selection of the best East Asian dishes.

The name of the restaurant is in homage to the district in Hong Kong of the same name, which is thought of as the place to go for a night out. Inside there is plenty of neon and ultraviolet lighting, also creating Chinese characters on the wall.

The menu is extensive with more than 30 starters and soups alone. Mains include the more exotic dishes such as stirfried prawns with asparagus in XO sauce and silken tofu cubes with minced pork.

For dim sum and bun lovers a section at the end finishes off the menu. There are separate listings for vegetable, rice, and noodle dishes as well.

There are numerous cocktails and sharing cocktails to choose from and a short selection of reasonably priced wines by the bottle. Draft and bottled beers are also available.

Since opening in 2010, Namaaste Kitchen, has built a solid reputation as one of the best Indian restaurants in London. It has won numerous awards, as well as regular praise from the capital’s restaurant critics.

The starters, and as with every dish, are labelled with chilli heat, as well as vegan, vegetarian and gluten-free.

There is a long list of reasonably priced main courses, followed by biryanis and tandoor dishes. Mains include Pesrsian Salli Lamb Boti, a Mumbai dish where lamb is cooked with green chillies, coriander, apricot, and salli potatoes.

Vegetables, breads, and rices complete the menu. Even the breads are original in their flavouring, including date and ginger naan and onion and green chilli naan. Namaaste Kitchen also offers a dedicated vegan menu with plenty of choice.

The history of how the owners of O Tino met is convoluted. Elizabeth fled her native war-torn Angola to eventually meet Madeiran, Tino. They started their Portuguese restaurant in 2009 and now their son and daughter, Pedro and Denise are part of the team.

All items on the main menu are rustic sounding and listed in Portuguese with a translation underneath.

To drink there is a selection of bottled beers and a list of very reasonably priced Portuguese wines by the bottle.

With a small outside seating area and overlooking Regent’s Canal, Arepa Venezuelan Kitchen, is an ideal spot to get away from the frenetic pace of Camden. The interior is modern, with abstract portraits on the walls and primary colours to brighten the mood.

The food is colourful and artfully presented on stoneware. The menu kicks off with a selection of sharing plates to introduce you to Venezuelan cuisine. These include yuca fries, which are served with paprika salt and garlic mayo. Arepas follow, which are traditional Venezuelan corn bread stuffed with a variety of fillings.

In the same way, Cachapas are traditional sweetcorn pancakes again stuffed with a variety of fillings. The main course listings finish off with bowls and side dishes.

There are plenty of Venezuelan cocktails to choose from, as well as bottled beer and wine listings mostly from Europe. Arepa Venezuelan Kitchen only accepts credit and debit cards.

The range of cuisines on offer in Camden should mean groups of friends can find a selection that will keep everyone happy and offer the chance to try some new flavours at the same time. The prices quoted on some of the menus are surprisingly reasonable for central London.

For example, the dishes at Namaaste Kitchen, the multi-award-winning Indian restaurant, which has won such glowing praise from restaurant critics are not priced much differently from the average takeaway. It’s finally worth noting that several of these listed restaurants also offer a breakfast and brunch menu.