At first glance, it would be easy to summarise Waterloo purely by the size of its railway interconnections and the many office workers to be seen scurrying to and from work. However, this would be glossing over the beating heart of the borough, with its many bars, pubs and attractions that draw people to the capital.

Some pubs, such as the Duke of Sussex, resolutely appeal to a family-friendly crowd, while some bars such as Vaulty Towers and Tonight Josephine Waterloo are designed purely for escape and fun. It is this continually evolving diversity and creativity that breathes life into the borough of Waterloo.

Hippo Inns was founded by a husband-and-wife team, who wanted to create family-friendly spaces that almost feel like an extension of the living room. Hippo Inns is a small chain of pubs which are dotted across London from Twickenham to The City.

The Duke of Sussex has a commanding position on a leafy street in Waterloo.

The pub is well looked after, with a welcoming ambience for customers. The bars are downstairs with the private dining room upstairs. Outside the beer garden is shaded by parasols, offering a relaxing city centre oasis.

To drink there are four draft beers, bottles, Hippo House cocktails, spritzs and a good selection of wines from many of the popular wine-producing regions.

To eat, there are starters, such as pork and smoked cheese sausage roll, with Colman’s English mustard. While mains, which are mostly English, extend to 5-bean Valrhona chocolate chilli, coconut rice, pickled walnut, avocado cream, and served with toasted corn tortillas.

The Duke of Sussex has a keen following for its charcoal spit-roasted chicken. The bird is brined and marinated for 24 hours for extra tenderness and spit-roasted flavour.

There is also a selection of steaks, which are rotated on availability and side dishes. Desserts are resolutely British. On Sundays, the same menu is available with the addition of four roasts and a vegan Wellington.

Only 100 metres from the hubbub of the South Bank, Waterloo Tap is a modern bar tucked inside an open, brickwork arch. With minimal decoration, wooden tables, and stools, it has clean lines of minimalism.

This is a drinker’s pub where you can sample an ever-changing array of challenging but delicious craft beer styles. UK breweries feature, such as Timothy Taylor, Redemption, Bristol Beer Factory, Marble, Hackney Brewery, and Adnams.

While there are also examples from larger German and Czech brewers, such as Bitburger, Budvar, and Rothaus, as well as the big USA craft breweries. According to the listings, the strongest beer is Stone Self-Righteous Black IPA at 8.7%.

After which you would be wise to fill up on Waterloo Taps’ East Asian gyoza, which are freshly made and delivered each day. Choose between tofu & miso, chicken chilli & lemon grass and pork.

A pub called the Stage Door has been on this site at least since 1665. Samuel Pepys, the London diarist mentioned the pub in his writings from around this time. With a friendly and relaxed reputation, the Stage Door has become the place where office workers come to relax after a hard day.

Patrons can come to relax and chat with friends or watch the latest match on TV. If the weather is favourable the rooftop terrace is a great place to sit back and watch the world go by.

The Stage Door has a total of 12 draft lagers, ales, and IPA’s, along with bottled beer, cans, and ciders. For wine drinkers, there are bottles from mostly European producers, which are reasonably priced and available by the glass.

A selection of toasties and paninis are available throughout the day. For larger appetites there is a choice of pies, served with mash and gravy, four pizza flavours, two burgers, one vegan and a selection of side dishes.

Every second Saturday of the month the Stage Door has live bands from 8 PM, where the local talent show off their own compositions and covers.

With an imposing corner position on historic Roupell St, the Georgian facade of The Kings Arms  is home to a genuine real ale pub. The winner of the much-acclaimed “pub of the year” award more than once, the pub is about as traditional as pubs can get.

Inside the pub is simply decorated and the walls are covered with all manner of knickknacks including plates, copper kitchenware and numerous framed paintings and prints. A large blackboard details the latest beers on offer.

However, the Kings Arms has additional hidden credibility, where the kitchen under the guidance of Lailar, originally from Chang Mai, serves up authentic and delicious Thai food, under the guise of Kanchana’s Kitchen Monday through Sunday.

The Kings Arms serves patrons a constantly changing selection of draft ales, with the emphasis very much on local breweries.

The menu kicks off with a selection of Thai starters, such as gai satay and butterfly prawns, followed by authentic main courses of noodles, fried rice, curries, stir-fries, and a few house favourites.

Every Sunday the Kings Arms holds its regular quiz night, where the questions revolve around your knowledge of Waterloo. There is the main prize and on-the-spot prizes during the evening. Patrons can order food and drinks via the pub’s app, so they don’t miss a moment of the action. 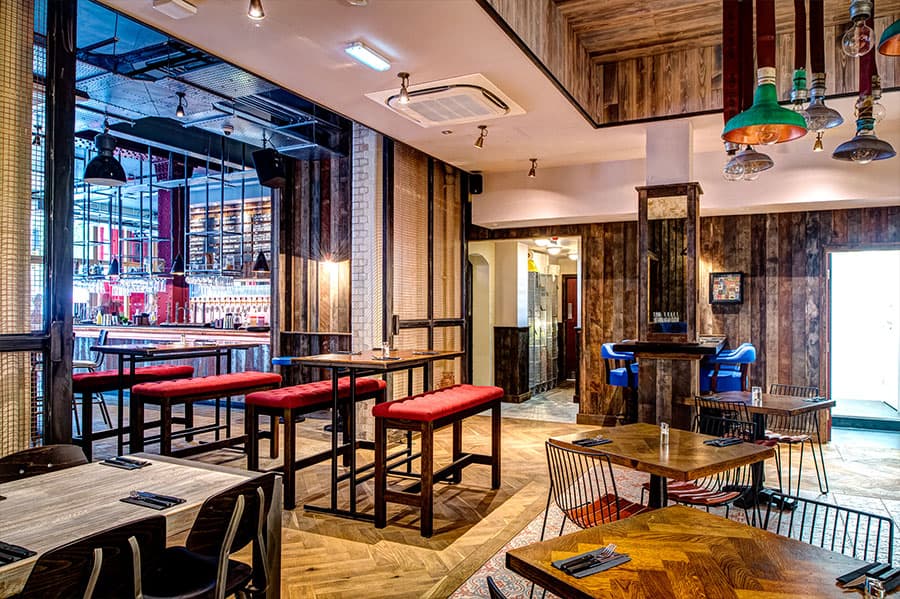 Just round the corner from the Old Vic theatre the Fire Station sits as a testament to its former guise, which goes back over a hundred years. After refurbishment, the interior is clean and modern with quirky pendant lights and original plain tiled walls.

The bar at the front is mostly for drinkers and often gets packed out after work and at the weekend. The rear dining room is a quieter space to relax, chat and pore over the menu.

The drinks menu is extensive starting with spritzs and a collection of gin cocktails, made with original ingredients. Moving on there are 12 hedonistic cocktails and two mocktails along with a selection of bottled beers and ciders. The wine list is eclectic offering mostly European, South American examples, available by the glass or bottle.

The menu is appetisingly hefty and full of creative and original ingredients. There are burgers, chicken tenders, and pizzas, as well as a section of tacos and snacks, which you can buy as sharing plates. Diners looking for something lighter can revert to the salad section.

The Fire Station also offers daily brunch, which is available until 12 PM and which can be converted to a Bottomless Brunch on Sat and Sun.

As the bar’s name implies Vaulty Towers is a tongue-in-the-cheek bar that screams fun. Once inside the decor is trippy, Gothic, and just plain weird in equal measures but is never boring.

Behind the bar, there are eight draft beers, guest cask ales and ciders, as well as a selection of bottled beers and ciders. There is a short wine list, available by the glass or bottle, as well as 14 cocktails and a couple of mocktails. The bar is completely cashless.

Food at the bar is supplied by Really Happy Chicken, whose vegan take on popular American dishes bring them bang up to date.

The Sticky Burger is built from crispy fried vegan chicken covered in a sweet sticky Korean BBQ sauce, which is served in a bun with coleslaw, mayo, spring onion and sesame. There are also numerous finger food dishes and loaded fries.

Vaulty Towers has a lively event scene with a pub quiz each Monday evening and DJs, Johnny & Patsy, spinning the records on the last Friday of every month.

As history tells us Joséphine knew exactly what she wanted and knew how to get it. As luck would have it, it now seems with Tonight Josephine Waterloo, you can have it too!

Inside the bar and to set the tone, a neon sign announces: ‘Well-behaved women don’t make history’.

Tonight Josephine Waterloo mostly attracts groups of women, who are looking for a night of glitz and fun, although guys are welcome too. The vibe is ultramodern with plenty of saturated neons of pinks, greens, and blues, and a mirrored ceiling giving the impression of space.

To drink there are a selection of shooters and a smaller selection of beers and ciders by the bottle. In keeping with the theme, the remainder of the drinks menu is almost entirely devoted to cocktails, which are broken down into subsections including specialist, tiki, gin, vodka, seasonal, and summertime.

Wines and a selection of sparklers and Champagnes are available by the glass and bottle. Happy Hour is a daily occurrence from 5 PM.

The menu includes numerous small sharing plates, which usefully include the calorie count.

Climbing the stairs up to Bar Elba you’re struck by the size of the rooftop bar. A painted steel structure spans the roof creating an open-sided bar area, with overhead rattan shading. The bar has developed quite a following and booking ahead is advised, especially at the weekend.

The decor is perpetually festive with coloured string lights, trailing plants, and succulents around the perimeter. The views are spectacular taking in the Shard, the London Eye, and many other skyline highlights.

Cocktails extensively headline the drinks menu, as well as frozen daiquiris and pina coladas. There is a shorter section of bottled beers and ciders, as well as sparkling wines and Champagnes. Bar Elba offers a selection of drinks packages for groups of friends, which are detailed on the website.

The menu has an American and Mexican theme offering burgers, hotdogs, and tacos. Burger flavours include beef, pulled pork, chicken and a vegan burger. They are all served in brioche buns with trimmings and skin-on fries.

Tacos are filled with pulled pork, chicken, pulled jackfruit and halloumi. A selection of side and sharing plates complete the menu. Brunch is served for 2.5 or 3 hours depending on the day and bottomless brunch lasts for 2 hours.

Unwined in Waterloo  is the follow on bar from the successful Unwined in Tooting.

Located in one of the busy market streets of Waterloo the bar has been constructed from recycled shipping containers. Not that you would realise at first glance, as the exterior and interior have a simple elegance that makes you want to go in.

Inside, simple wooden tables and stools are spread throughout the room, while wooden casements on the walls display a selection of the available wines from the drinks menu.

The lighting is idiosyncratic, where green wine bottles have been fitted with filaments and strung from the ceiling in threes.

The wines on the menu are predominantly European with a few additions from Australia and South America. They are broken down into sections according to fruit, fragrance, and complexity. Some are available by the glass and others by the bottle only.

There is a short section of bottled beers and ciders, as well as several low alcohol or no alcohol drinks. There are a couple of sharing cheese and charcuterie boards, which complement the wines. You can mix and match between the ingredients as you like.

Waterloo is blessed with some of the best connections in London, whether by overground, tube or bus. As such it is an ideal spot to spend an evening and where the choice of hospitality couldn’t be more varied. There are numerous rooftop bars and pubs, where you can take in the London skyline while enjoying a drink or you can try the authentic Thai cuisine in the Kings Arms, which was voted ‘pub of the year’.

After the frenetic pace of a night out in Waterloo, you can always opt to take a stroll along the Thames to finish off your perfect night.