Opened on New Year’s Eve in 1999, The London Eye is the most popular paid attraction in the United Kingdom pulling in over 3 million visitors per year. The local embankment along either side of the Thames is a well-liked route for Londoners and tourists alike. Walking around London you are constantly surprised by discoveries of the changes the capital has been through over the centuries. 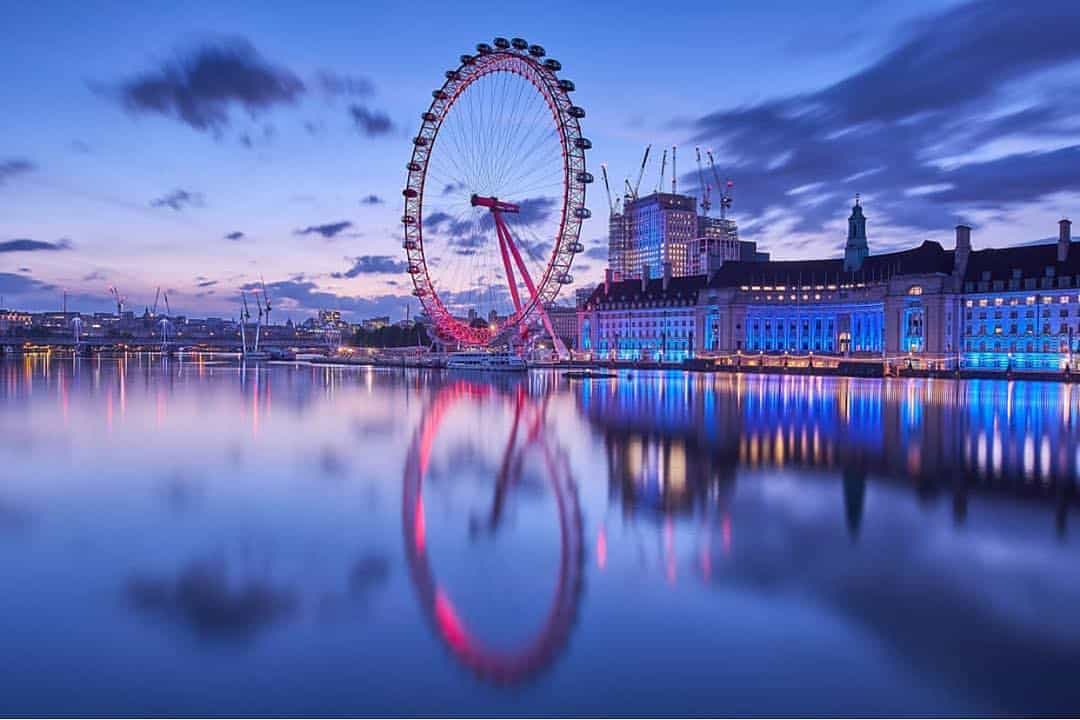 Only a short stroll further across Westminster Bridge brings you to Big Ben and the Houses of Parliament. The restaurants in the vicinity of The London Eye are as varied as the tourist attractions, ranging from the celebrated fish dishes of J Sheekey, to Okan’s, with its Osaka’s street food menu, and on to the thorough Britishness of The Archduke.

The familiar red and gold frontage of J.Sheekey heralds a restaurant that has been serving fish, shellfish, and seasonal game to diners in the heart of London’s Theatreland since the 1890s.

Stallholder, Joseph Sheekey, was granted permission by Lord Salisbury to serve fish and seafood in St Martin Court. This was the origin of the theatre connections, which carry on today with original photographs of actors from the 20th century lining the restaurant walls.

The menu immediately sets the tone with oysters and caviar, as well as numerous delightful shellfish starters, such as Shellfish Bisque, with cognac & tarragon cream.

Just before the main courses, there are three Fruits de Mer platters with different ingredients.

Main courses are predominantly different fillets of fish pan-fried or roasted and served with individual sauces and not to forget J Sheekey’s legendary fish pie. Mains also include lobster and steak, as well as a good selection of side dishes. The vegan and vegetarian menu is more extensive than most with more than four choices of starter and main course.

To drink there are cocktails and mocktails, which reflect the changing times of the past 125 years. The wine list extends to 8 pages and reflects choices from most of the world’s popular wine-growing regions. For whiskey connoisseurs, there is a whiskey menu to rival most with examples from Ireland, Scotland Japan, and America.

The Library at County Hall

The stately elegance of County Hall today, with its numerous eateries, is a far cry from its former incarnation in the 1980s. Walking into The Library you are met with a classic and stylish simplicity that energises your hope for the food and drink. Tables are separated by large, glass-fronted bookcases, while there are swags of fabric and plaster busts that monitor diners’ every move.

If you’re looking for a lighter meal, then The Library offers afternoon tea in sumptuous surroundings and with some of the best views of Parliament across the river. Alternatively in the evening, the chefs conjure an innovative, six-course evening menu which shows off the best of seasonal English produce.

This Osaka-style Japanese restaurant has two sister restaurants in Okan Brixton Village and Okan Brixton East. The Southbank Okan restaurant is just around the corner from the London Eye. Climbing the County Hall steps and inside takes you to the interior of the restaurant, which is distinctly Japanese, like stepping into another continent.

The open-plan kitchen, Japanese memorabilia, and signs make you feel right at home, while the tables and chairs, and stools at the servery are purely functional. The menu starts with Japanese tapas dishes, such as Onasu, ginger aubergine cooked in soy and honey and Lotus Root Kinpira served with sweet soy and chilli.

The menu moves on to Osaka’s street food favourite, Okonomiyaki, which can be prepared with a variety of fillings and toppings as well as, Kimchi. There are a variety of noodle dishes with udon and soba, as well as curries and soup noodles to slurp.

To drink, there are a selection of cocktails, bottled Japanese beers, plum wine, sake and sochu, a Japanese sweet potato liqueur. There is also a short selection of wines from France and Spain.

Established in 1976, La Barca has been bringing the flavour of Italian hospitality to London for almost 50 years. Starting out as mainly Tuscan flavour inspired, it now uses inspiration from many other regions of Italy.

Head Chef, Nicola Stoccoro, the son of a restaurateur was always surrounded by the finest Italian cooking and hospitality as he grew up. La Barca is an elegant restaurant, with an interior of black, white, and dark blue contrasts. Walls and coves display the Italian wines, along with signed portraits of famous patrons.

There is plenty of choice on the menu with more than 15 meat dishes alone. The cooking is traditional Italian and for a little theatre, some dishes are flamed at the table.

Rice dishes include risotto with fresh asparagus and a main of veal escalope with Gorgonzola, cream, and black truffle.

There is an extensive wine list, which is arranged by region to make finding your favourites easier.

The hospitality company, Black and Blue, opened in 1999 with their three restaurants, The Archduke, Waterloo, and Borough, where they quickly established repeat custom with their fairly priced menu of British cuisine.

The Archduke resides in Waterloo’s railway arches with a brickwork facade, which is carried through into the spacious interior decor. At night-time, the lighting is dramatic, while the banners promise cocktails, steak, and jazz.

There is a small Bar Menu listing small sharing plates and larger platters, also for sharing.

The main menu is à la carte, although there is a reasonably priced Prix Fixe menu for two and three courses at £20 and £24 respectively, available until 7 PM.

Starters on the à la carte menu include Crayfish & Avocado Salad, with seafood sauce on chunky guacamole, while for mains steak dishes take centre stage, which are aged for up to 28-days and served with bottomless fries. There are also burgers and rotisserie chicken, as well as a selection of dishes from the chargrill.

Desserts are resolutely British including sticky toffee pudding and apple and cinnamon pie. To drink there are cocktails, and sparkling wine and champagne. The choice of wine is varied and listed by the style of taste. It is available by the glass, carafe, or bottle.

Cocktail Hour runs from Mon-Wed 4-6 PM and live jazz is played most days with full details on the website.

Bao Fa Garden is located inside the County Hall building, which offers some of the best views across the Thames to Big Ben and the Houses of Parliament. Reviews for the restaurant are glowing, citing how authentic the Chinese flavours are. It’s no surprise to hear that its sister restaurant is in Shenyang, the capital of Liaonin province.

The interior walls of the restaurant are spotlighted in blue with wood panelling below, while Chinese lanterns and artefacts set the scene. Tables range around the sides of the restaurant, along with a central service area with bar stools.

The menu is styled as classic fusion cuisine, where Chinese and Asian dishes are prepared to a very high standard and presented immaculately on Chinese crockery.

The restaurant is particularly noted for its Beijing roast duck, homemade tofu, and seafood hotpot.

Visiting Chinese reviewers for the restaurant often complement the authenticity of the cooking such as for the stir-fried lobster with ginger and spring onion, the crispy chicken wrapped with shrimp and the dim sum, which includes har gau, siu mai, char siu buns.

To drink, there is a short wine list that features bottles from Europe, the New World, and New Zealand. There is also a selection of Chinese rice wines and liqueurs.

Launched in 2011, Honest Burgers now have numerous outlets in the capital and more each year farther afield. The owners were keen from the outset to produce great burgers but in an environmentally responsible way. They started working directly with British beef and potato farms so they could be assured of the product’s quality.

Their farms also practice the older style of regenerative farming. Where fields are given time to rest and recover before animals start grazing again. This enables reduced input of insecticide and fertiliser.

The burgers are predominantly beef with options to add extra toppings such as, French mustard, pickles, and chilli cheese. The top of the range beefburger is the New Orleans, which includes bacon, American cheese, green tomato relish and chipotle hot sauce.

There is also a chicken burger, served with pesto, mustard mayo and rocket. For vegans and vegetarians, there are three options of plant-based burgers. To drink there is a short selection of cocktails, bottled beers, and ciders and wines.

Locale Italian restaurant and cocktail bar is within a stone’s throw of the County Hall building on the South Bank. There are outside tables to the front, while the interior is simply but attractively furnished with wooden tables and chairs.

The menu kicks off with starters and salads before moving on to the authentic Italian dishes the restaurant has built a reputation for. Pasta dishes include Paccheri, made from fresh tubular pasta with Tuscan sausage, tomato sauce and mozzarella cheese or the fresh egg pasta of Linguine, made from egg pasta with clams, mussels, octopus, calamari, tomato, chilli, parsley, wine, and king prawn.

The pizzas are reasonably priced, freshly made each day and stone baked in the oven.

To finish the main courses there is a selection of house specialities such as Pollo Milanese. Desserts are typically Italian with tiramisu, pannacotta with mixed berries, as well as ice cream and sorbets.

Locale also has a dedicated kid’s menu, as well as a gluten-free and vegan menu.

For drinks, Locale has a weekday Cocktail Happy Hour from Mon to Fri between 5 PM to 7 PM. A selection of beers and wines are bottled, and the wine list is almost exclusively Italian and broken down into flavour profile.

The region around the South Bank is a great destination to spend a half or a whole day exploring the attractions and history of London. When it comes to dining the world pretty much is your oyster and you can find nearby restaurants that suit your taste and pocket. Many restaurants have a Happy Hour at the end of the afternoon, where you can celebrate your enjoyment of the day.