The neighbourhood of Peckham is named after The Peck, a stream that runs mostly underground through the area. Historically it became the last village where Kent farmers would rest before driving their herds of cattle to sell them in the London markets.

Years of decline left infrastructure in a poor state of repair, which attracted crime and antisocial behaviour. However, continued investment has turned the situation around to such an extent that Peckham is now a desirable centre for culture and food.

At the same time, the combination of the authentic African markets and shops and the long-standing British families reflects the diversity and vibrancy of the population. 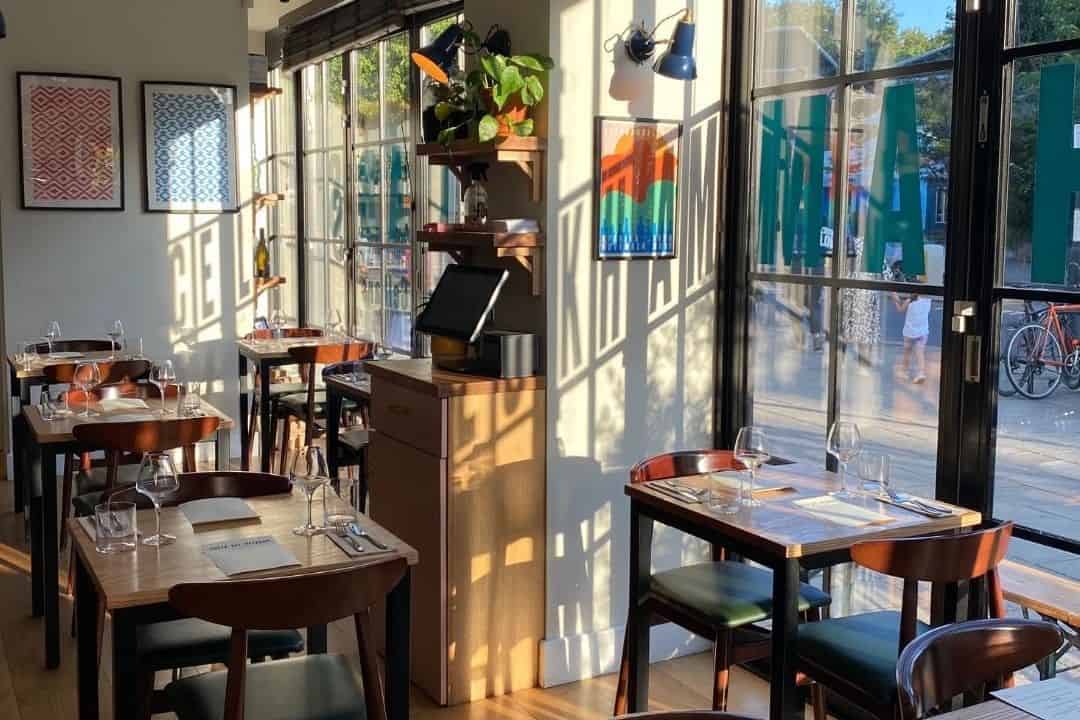 Diners are spoilt for choice now with quality, affordable restaurants reflecting local tastes and beyond. Several restaurants are staffed by chefs and managers who have graduated from some of the best central London eateries.

All chefs understand the importance of authenticity and originality in ingredients and dishes. The Begging Bowl, for example, imports as many ingredients as possible directly from Bangkok markets.

Michelin Bib Gourmand-winning restaurant and wine bar Peckham Cellars has rapidly become one of the most popular local restaurants with reviews to match. The restaurant is on the small side but there is plenty of bench seating outside for the warmer months. Inside the lighting is subdued and numerous artworks brighten the walls.

The menu is broken down into snacks and small plates so diners can mix and match and create as much variety as they like. Snack plates include blue cheese and walnut croquetas or mortadella burrata with pistachio pesto.

With a name like Peckham Cellars you can imagine the wine list is more than adequate. In fact, there are two wine lists, one for everyday drinking with examples mostly from Europe and South Africa, while a separate bottle wine list stretches to two pages with the wines grouped by flavour and grape variety.

Artusi first opened its doors to Peckham inhabitants in March 2014. It has since established a great reputation for unpretentious, authentic Italian inspired dishes. Many dishes are created with their homemade pasta, which is made fresh each day.

The dining room is simply decorated with white walls and straightforward furnishings, while the welcome is Italian, warm, and friendly. Starters include tema artichokes, spinach, butter sauce, and pine nuts and a vegetarian main course consists of grilled fennel, violino pumpkin, bitter leaves, and hazelnuts.

The restaurant also offers a set three-course menu on Sundays for £25 from 12.30 to 4 PM. For groups of eight or more Artusi offers a sharing menu and the larger table in front of the open kitchen can seat up to 18 diners. With notice, the kitchen can prepare a feast, such as suckling pig or shoulder of veal.

The wine list is predominantly Italian and is extensive in range and price for the size of the restaurant.

Albanian-born chef John Gionleka has been stamping his mark on the Peckham dining scene with his restaurant Peckham Bazaar for several years. Along with his business partner their inspiration is Eastern Mediterranean, which includes the former Ottoman region, from the Dinaric mountains to Anatolia.

The menu changes daily to reflect seasonality and the best available ingredients ensuring the authenticity of the Balkan flavours. The restaurant has an open-plan kitchen and plenty of grilled meat options on the menu, so the aroma when you enter is tantalising. There is some outside seating too.

Dishes are varied including pan-fried kourkoubines, which are similar in texture to the semolina dough of gnocchi, and which are served with sauteed ceps, butternut squash, roasted celeriac puree and aged Graviera. For dessert, a light, orange-scented baklava, is served with strawberry and orange sorbet.

Levan has had the luck of good timing since it opened in 2019 and has prospered on the coattails of regeneration in the surrounding borough. With plain blue-and-white branding the bistro is housed conveniently close to the stations of Peckham.

Inside, the menu theme is contemporary European dishes, and there is plenty of choice among meat, fish, vegetarian, and plant-based options. The menus can be confusing at first glance but include a set lunch menu and à la carte during the day and a six-course set menu for dinner.

Example main courses include ling, mussels, fermented chilli, and a dessert of Basque cheesecake with hazelnut. The staff are knowledgeable, interested, and young. Wine is sourced from France, Italy, Spain, and Germany and the restaurant is keen to buy from smaller artisanal producers.

Kudu takes its name from an African antelope and the menu at the restaurant is largely South African-inspired. Amy Corbin, and her South African partner, chef, Patrick Williams are the brains behind the eatery. Amy is the daughter of Chris Corbin, who overlooked the brand of the stratospheric Wolseley and the Delaunay.

The restaurant is minimalist with exposed brick walls, low hanging pendant lights and an open kitchen. The waiting team know their trade, not surprising after Amy’s experience in some of the best dining rooms in the capital.

The dinner menu is à la carte with dishes such as onglet, hispi cabbage, enoki mushrooms and truffled potato mousse, with a salted chocolate ganache, and sesame ice cream, and chocolate crumble for dessert. There is a set menu for lunch for two and three courses and a brunch menu at the weekend between 11 AM and 2:30 PM

The wine list is mostly South African bottles along with a few European examples.

The restaurant is simply decorated with an attractive greenhouse section at the front, filled with all manner of plants, which makes it a great place to enjoy your meal. As many Thai ingredients as possible are sourced directly from Bangkok to ensure the authenticity of the flavours.

The food is all served on sharing platters, where you will find fish dishes such as cured cod, green mango, rhubarb, agretti, lemongrass, and citrus chilli dressing, along with the vegan dish, shiitake, enoki mushroom, tofu, sea rosemary, rock samphire, and an aromatic broth. All dishes are served with unlimited jasmine and sticky rice.

A short wine list accompanies numerous cocktails, both alcoholic and non-alcoholic, along with craft beers and a handful of Japanese whiskeys.

Restaurant owner, Richard Robinson, refurbished the Coal Rooms in 2017. Originally the rooms served as the ticket office for Peckham Rye station, however, now the interior has a minimalist style with light-coloured pine tables, chairs and parquet flooring.

Head chef, Adrian Fernandez-Farina, cut his teeth in several top restaurants around London, including Hawksmoor and the Chiltern Firehouse. The restaurant has a reputation for excellent meat and poultry, superbly cooked on the charcoal grill to produce notable classic British dishes.

The Sunday lunches at the Coal Rooms are the stuff of legend with beef, lamb, and chicken or expertly cooked and served with a vegetable gratin and all the extras.

The Larry in Larry’s is styled after the celebrity NYC DJ, Larry Levan, and not as most people presume comedian, Larry David. This makes more sense when you discover the team behind Larry’s are the same ones behind the equally successful, neighbouring Levan.

The premise is clear, an all-day diner motivated by the numerous eateries in New York, among the Italian-American and Jewish communities. The owners had the misfortune to open shortly before the first lockdown but undeterred they weathered the disruption and now, Larry’s is going down a storm.

The decor is fairground chic, with retro orange laminated tables and decidedly green plastic chairs. The menus are brief but there is plenty of interest in the ingredient pairings such as the snack of smoked cheddar beignets, with parsley aioli or the main of cumin and lamb, with kidney and pappardelle.

Brunch is served from 10 AM to 2:30 PM and includes its own Saturday night recovery menu. At Larry’s wine is served by the glass from a small selection of artisanal producers.

It finally seems after years of wallowing in the doldrums that Peckham is well on the way to securing a place for itself as a centre of culinary excellence. The diversity of cuisines goes some way to illustrate the enthusiasm the borough’s inhabitants want to celebrate.

Our choices reflect the best of South African, Thai, European, Mediterranean, British, and even New York delis. It is a vibrant range that mirrors the inhabitants.