Many of our top famous foods in London have been served in pubs and restaurants for hundreds of years. The dishes cross all sorts of cultural barriers. Such as the Scotch egg, which was originally created by Fortnum & Mason as a way for the gentry to eat while travelling but is now a cheap snack enjoyed by everyone.

Similarly, the jellied eels, pie, mash, and liquor shops of the East End of London were a necessary staple for poor families. The food shortages during the two wars necessitated cutbacks in recipes, such as the traditional sausage. The extra water content caused the sausages to pop with a bang, and so they were renamed bangers. 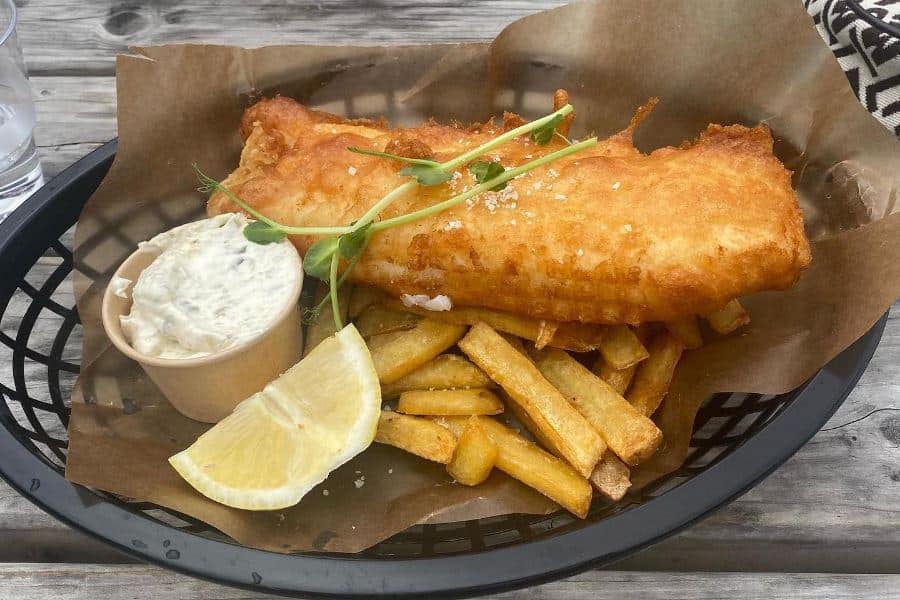 Food in London constantly evolves as diners become more educated about the dishes they eat and where they come from. At the same time, new chefs start in the industry eager to stamp their creativity on their menus. 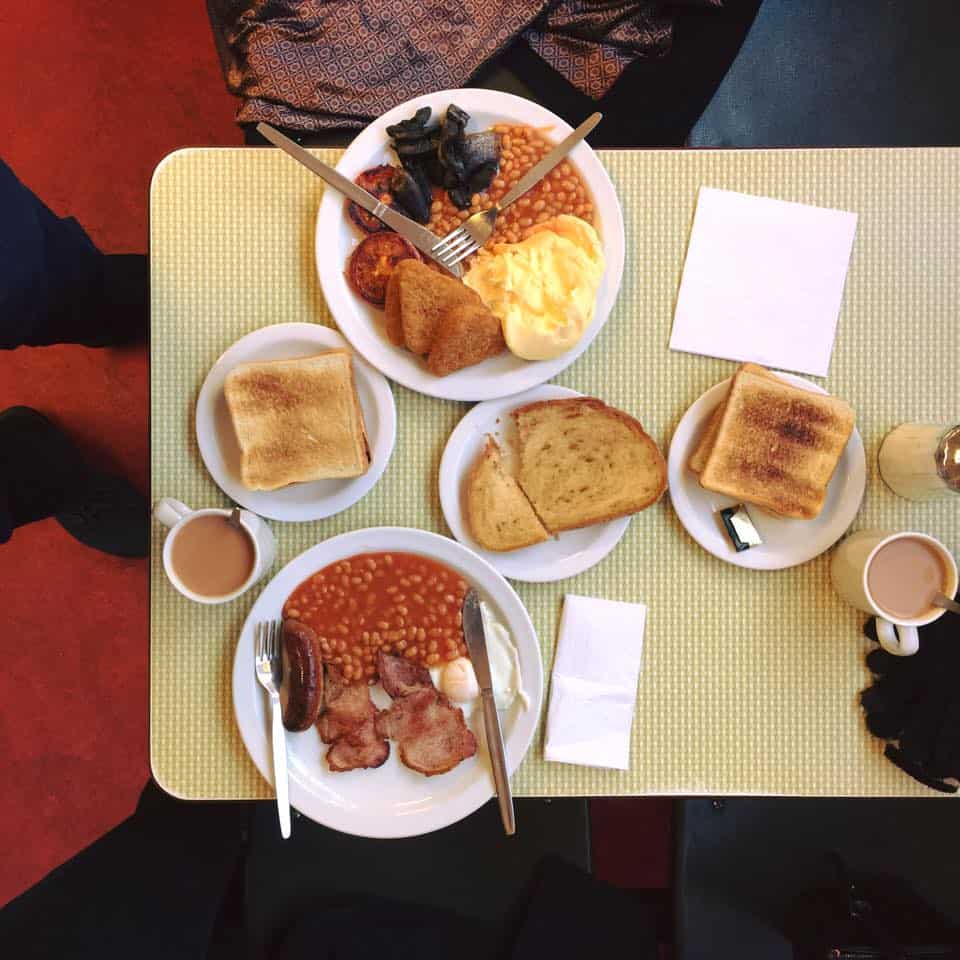 The full English breakfast is now an institution in Great Britain. You will still find it being served every day in most British hotels. It includes fried eggs, sausage, bacon, fried tomatoes, mushrooms, fried bread, and sometimes baked beans, and black pudding.

The breakfast is still so popular it is often served throughout the day as all-day breakfast. The dish is usually served with tea or coffee.

It is a substantial dish that is high in fat and that English people believe prepares you for the day ahead, hence its enormous popularity after World War II. The Irish and the Scots prepare a similar breakfast, but they naturally call this the full Irish or the full Scottish.

The concept of the English breakfast goes all the way back to the 13th century, particularly when it was served in the wealthier country houses of the upper classes.

Regency Cafe, SW1 – a no-frills café with an excellent reputation

When you first hear about it most people are confused by the idea of a Pie, Mash and Jellied Eel Shop. It sounds like a strange and random combination of foods to serve together.

However, when you realise these dishes first appeared in the dockland area of East London, where there were many poor people, it starts to make more sense.

These shops were using simple and cheap ingredients such as eels, which at the time were plentiful in the Thames, minced beef pies and mashed potato. Originally the pies were filled with eels, but the lack of stock resulted in a change to minced beef.

There used to be numerous Pie, Mash and Jellied Eel Shops throughout East London and farther afield. However, as the stocks of eels in the Thames fell dramatically because of pollution so the shops followed suit.

Goddard’s at Greenwich – offer a larger selection of pies

Often thought of as the national dish of Britain, fish and chips first appeared in British high streets in the 1860s. Strangely, there are no records of why deep-fried, battered fish would taste so good with fried potatoes or chips.

The meal is usually served with malt vinegar (with a stronger taste) and salt, although many also like to add tomato ketchup.

The dish was an instant success and by 1910 there were 25,000 fish and chip shops in Britain. Understanding its popularity, the government refused to ration fish and chips during both wars, which further cemented the dish as a staple of the British diet.

However, as stocks of fish have become more scarce, prices have risen and so fish and chips are no longer seen as a cheap midweek meal. Consequently, the number of fish and chip shops has fallen dramatically.

Amazingly, the ingredients and the cooking process have changed very little over the 150 years of its existence, apart from the change of frying them in beef dripping or fat to vegetable oil.

Best Fish and Chips in London:

Legend has it that Anna, the seventh Duchess of Bedford, often had a sinking feeling in the middle of the afternoon. Her remedy was a small selection of sandwiches to tide her over until dinner, which she called afternoon tea.

Afternoon tea has grown both in size and popularity since, where now you will be presented with crustless, dainty sandwiches of egg and cress, and cucumber. The sliced cake is also usually on offer, such as Victoria sponge or Battenberg. Scones may also be served in the same way as a cream tea, with clotted cream and jam.

Afternoon tea in Britain has changed over the years and is now enjoyed as an event at an expensive hotel rather than a light snack that stops you from feeling hungry.

Alehouses, taverns, and inns have been serving bread and cheese with a pint of beer at lunchtime for hundreds of years. However, as the name suggests, Ploughman’s lunch has never been associated with wives taking cheese and bread to their farming husbands working in the fields at lunchtime.

Surprisingly, Ploughman’s lunch was created as a marketing campaign in the 1950s by the Cheese Bureau. This was a government body created to improve cheese sales. This occurred soon after the war when cheese had only recently been removed from rationing, so there was a national effort to start the population eating more cheese.

The lunch usually consists of crusty bread, a large slice of cheese, butter, pickled onion, or gherkin and a spoonful of a pickle. In this context, pickle is a chutney often sweet or more savoury like piccalilli. The Ploughman’s lunch is usually served with a pint of beer.

The Ship Tavern, WC2 – a hidden gem. Excellent food, not that expensive

The Queen’s, NW1 – a sharing platter with a sausage roll, Scotch egg and glazed ham

The people of Britain love to celebrate the popularity of the Sunday roast. In fact, in a poll which was conducted in 2012 Britons rated the Sunday roast as the second most popular thing they like in Britain.

It was during the reign of King Henry VII in 1485 that the tradition of a Sunday roast took hold. Britons were great meat eaters, and the Yeoman of the Guard were nicknamed ‘beefeaters’ because of their love of eating meat. They still have the same nickname today.

In these times the Yorkshire pudding was served with plenty of gravy before the meat, in the hope diners would have less of an appetite for the more expensive meat. Large joints of meat were roasted in vast fireplaces and served simply at the table.

The Sunday roast has developed to include several other meats, including lamb, chicken, turkey, and pork, all served with gravy. These are all served with roast potatoes, and a selection of vegetables such as carrots, broccoli, peas, and parsnips.

Depending on the meat in the roast different accompaniments will be served, so for example roast beef is served with horseradish sauce and turkey is served with cranberry sauce.

Chicken tikka is a chicken dish originating in the Indian subcontinent during the Mughal era. The dish is popular in India, Bangladesh, and Pakistan.

Chicken tikka is cooked from small pieces of boneless chicken, which are marinated in Indian spices and yoghurt. These are then grilled on skewers on a brazier or over charcoal.

A tomato and coriander sauce is common, but no recipe for chicken tikka masala is standard; The sauce usually includes tomatoes (frequently as purée), cream, coconut cream and a masala spice mix.

The origin of the dish is not certain, but many sources attribute it to the South Asian community in Great Britain; some sources also cite Glasgow as the city of origin.

Sausages earned the nickname bangers in Britain during the First World War. Meat supplies were scarce and so the sausage fillings were stretched further by adding more rusk and water.

Consequently, when they were cooked the water turned to steam, which burst the natural casing of the sausage with a ‘bang’! So, the meal, sausage and mash, suddenly became bangers and mash, which it is frequently still called today.

Sausages were first introduced to Britain by the Romans in 400 AD, and they have been an established part of the British diet ever since. They are an economical way of using cheaper cuts of meat to create an easy to cook and delicious meal.

British sausages are generally made from minced pork but can also be made from beef, game, and poultry. The minced meat is usually mixed with herbs, seasoning and rusk, a dried cereal ingredient made from seasoned wheat flour.

Mashed potato has a long history in the UK. It is first mentioned in a cookbook of 1747 by Hannah Glass, called The Art of Cookery. The recipe is very similar to today consisting of boiled potatoes mashed with butter, milk, or cream, and salt-and-pepper.

Sausage and mash is often served with onion gravy.

Best Bangers and Mash in London:

Sticky toffee pudding is still a very popular dessert in the UK, especially during the colder months when diners want more filling meals.

As to who first started making sticky toffee pudding is still widely contested, with claims from as far afield as Canada and Australia. However, the Lake District does remain a popular contender for the pudding’s origins.

During the 17th and 18th centuries imports from the Caribbean were stored in warehouses on the docks of various ports throughout the Lake District. The ingredients included rum, coffee, dates, and sugar, two of the ingredients for sticky toffee pudding.

So possibly smugglers introduced these rare ingredients to the population of the Lake District.

The humble Scotch egg has been going through something of a renaissance in Britain over the past few years, where it has been deconstructed and reconstructed innumerable times. It must be said, however, that the original Scotch egg still has a lot going for it.

A boiled egg is encased in a thick coat of seasoned, minced pork, which is then rolled in breadcrumbs and deep-fried. The Scotch egg can be served hot but is usually served cold as part of a buffet or picnic.

The food hall, Fortnum & Mason, in London’s Piccadilly lay claim to selling the first Scotch eggs in 1738, 31 years after opening. They may have found inspiration for the dish from the Mughlai dish, Nargisi Kofta, Narcissus meatballs, which were popular at the time.

The real benefit of the Scotch egg is its convenience. It can be transported easily and is ready to eat, so it is ideal for people on journeys, as well as for picnics.

The Pig and Butcher, N1 – craft beers and seasonal meats

The Wigmore, W1 – excellent pub food in a retro-designed restaurant

It’s very easy and cheap to travel around central London by Tube and bus. So if you are a foodie and interested in the traditional dishes of other countries use this guide to visit a selection of the pubs and restaurants listed. Here you can try some of the best examples of famous London dishes, many of which have existed for hundreds of years.