When J.K Rowling created the wizarding world of Harry Potter, she attracted a whole world of muggles, witches and wizards fans. Die-hard Harry Potter fans travel the world to visit locations where the movie was filmed, including the famous Diagon Alley in London.

Diagon Alley is the legendary shopping street that JK Rowling introduced to the world in her Harry Potter realm. If you have seen Harry Potter and enjoyed the wizarding street on the big screen, you’ll be happy to know that Diagon Alley is real (well, sort of), and you can enjoy a good cup of coffee there. 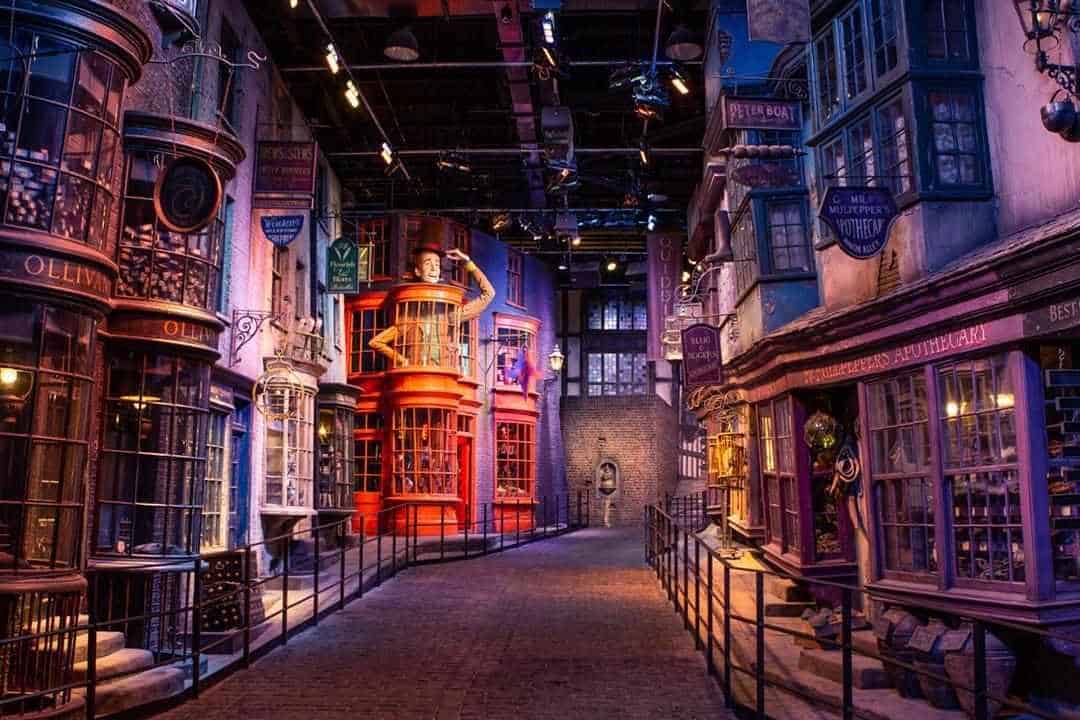 This article is for all of you who have never heard of Diagon Alley and the rest who want to know a little more, so keep reading.

Is There a Real Diagon Alley in London?

Die-hard Harry Potter fans would be happy to know that they can visit Diagon Alley in real life. However, it won’t be by that name, but you will see where some of the scenes were filmed. There is not one, but a few locations claim to be the real Diagon Alley in London.

It is believed that the iconic Diagon Alley was inspired by the real-life cobblestone pedestrian street Cecil Court and the Victorian-style Leadenhall Market in Charing Cross, London. Goodwin’s Court is another contender.

Where is Diagon Alley in London?

The wizarding street of Diagon Alley real life can be found in Leadenhall Market, tucked away out of Gracechurch Street sight. The Diagon Alley location looks just as magical as in Harry Potter and the Philosopher’s Stone. With cute displays of souvenir shops, cafes and pubs, it is one of the most Instagrammable places in London.

In the middle of Leadenhall Market is the iconic witch and wizard pub, The Leaky Cauldron (which is the entryway to Diagon Alley in Harry Potter and the Philosopher’s Stone). If you are a Harry Potter fan, you may remember the scene where Hagrid and Harry walk through the market and then enter The Leaky Cauldron Pub through a blue door.

Namely, the pub existed long before Charing Cross Road was even planned, the early 1500s, to be more exact.

Although it is only accessible to wizards in the movie, the Harry Potter Diagon Alley, London welcomes all – wizarding or non-wizarding travellers.

This is the iconic scene where Hagrid opens up a new and magical world to Harry Potter.

Leadenhall Market, as well as the entire area of Charing Cross Road, is famous for the numerous bookshops, many of which sell books of witchcraft, magic, paranormal and occult.

With a glass roof, Victorian charm, and a magical atmosphere, Leadenhall Market is an excellent indoor activity when the weather is gloomy and rainy. The best time to visit Leadenhall Market is during the weekends when Londoners go for a weekend getaway, and the city is emptied.

If you happen to be in the Covent Garden neighbourhood and want to get away from the hustle and bustle of the busy street, make a turn to the dreamy Cecil Court lane. If you stroll down the street linking Charing Cross Road and St Martin’s Lane, you will immediately see why it is thought that JK Rowling was inspired by it.

Cecil Court boasts Victorian architecture and cute pastel shop facades and is lined with book vendors and antique sellers, including the world-famous bookshop Foyles. With over 20 secondhand bookshops, the charming cobblestone street is also known as the Booksellers’ Row, and it is every book lover’s paradise.

Cecil Court turns out to be a popular spot for movie sets. Beside Harry Potter, Cecil Court appears in other movies, including Miss Potter (2006) and 84 Charing Cross Road (1987).

There is every reason for you to visit this Victorian frontage street, whether you are a Harry Potter fan or not. Just make sure you stop by in the early hours of the morning and mid-week, as the famous street can get a bit crowded in the afternoons. Shops here open around 10.30 am and shut around 5.30 pm.

Some Harry Potter fans believe that Goodwin’s Court is the real Diagon Alley. Goodwin’s Court is a little less known and well-hidden, narrow alley in West End London. The Diagon Alley-look alike lane runs between St. Martin’s Lane and Bedfordbury. It is the perfect getaway from the busy area of Trafalgar Square.

With a Georgian feel, crooked houses and bow-fronted windows, the old-world street off St Martin’s Lane surely looks like Harry Potter Diagon Alley. Although less known, it doesn’t stop Potterheads from visiting and wandering the street adorned the street.

If you want to know how much Goodwin’s Court resembles the real Diagon Alley, the Diagon Alley set at Warner Brother’s studios is the closest to it. Many fans believe this is the real Harry Potter Diagon Alley, London.

How to Visit the Diagon Alley Real-Life Location?

While you can always wander the streets of London and actually walk to Leadenhall Market and Cecil Court, you can experience Diagon Alley as it appeared in the movie by taking a tour.

The Warner Bros Studio Tour includes many of the original sets of Harry Potter, including the Diagon Alley set. The tour takes you around a full-scale set of Diagon Alley, where you can walk down the cobblestone, narrow and winding streets, past the shops and take a selfie in front of the Weasley’s Wizard Wheezes, where the Weasley twins sold everything from extendable ears to fireworks.

The wizarding street set had constantly changed throughout the film. Many of the Diagon Alley set pieces were also used in the village of Hogsmeade for Harry Potter and the Prisoner of Azkaban.

Besides Diagon Alley, the tour allows Potterheads to visit the sets of Dumbledore’s office, Snape’s classroom and a lot more of the wizarding world.

There are numerous locations in London where Harry Potter was filmed. Many Harry Potter fans choose to do self-guided tours, but if you don’t know where to start, it’s best to book yourself a guided tour so you don’t miss even one set.